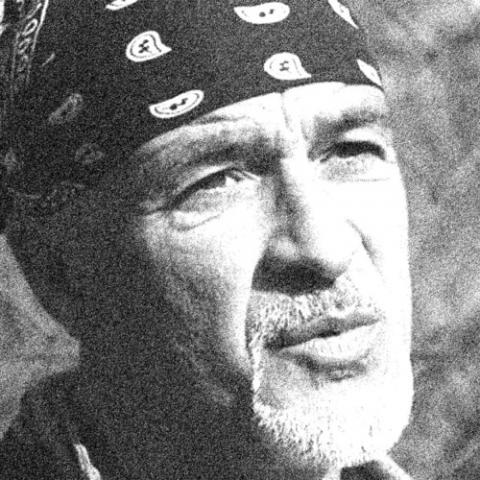 via The Free Online

Gabriel Pombo da Silva is a well-known Galician anarchist militant who has spent more than 30 years in prison. Always at the crossroads of repression, both Spanish and from other European States, for his commitment to the anti-capitalist struggle, he wrote a book during his stay in jail – Diario e ideario de un delincuente -, as well as different booklets – gathered in the book Parte de un appido— and other writings.

Our colleague Gabriel Pombo remains kidnapped in prison after serving 33 years, even though his sentence expired for more than 6 years ago, according to the rules of a fallacious and criminal “rule of law”.

After 3 and a half years of freedom, he has been illegally detained again and since the end of last June, Gabriel has been imprisoned in the Mansilla de la Mulas prison (León).

They continue to observe him to see if something has changed in his gaze, in his attitude always worthy of him in his rejection of the hypocritical prison “respect”.

As anarchists against any system of confinement, we do not care if it is legal or illegal, but in the sense of justice (not of the State’s) we maintain and vindicate it.

In coherence we demand:

Freedom for our partner!

His partner Elisa sent us information about the anarchist comrade Gabriel Pombo da Silva, who has already been transferred and is in the Mansilla de las Mulas prison in León, Spain.

Although she has not yet been able to speak directly with Gabriel, she knows that he is fine and that the Mansilla prison in León is an “adaptation” prison [these are the “Módulo de respeto” sections where inmates can take on certain responsibilities within the prison getting “perks” in return, such as cell doors open during the day], so they’ll want to keep him there for some time.

It is possible to write to him and keep in contact with him at the following address: Gabriel Pombo da Silva C. P. Mansilla de las Mulas Paraje Villahierro 24210 Mansilla de las Mulas (León) – Spain We cannot forget our comrades in prison! The struggle continues! Freedom for the imprisoned anarchists!

We Talked with a Doctor About Coronavirus

The Ex-worker #76: Anarchist Nurses Speak Out on Survival and Resistance