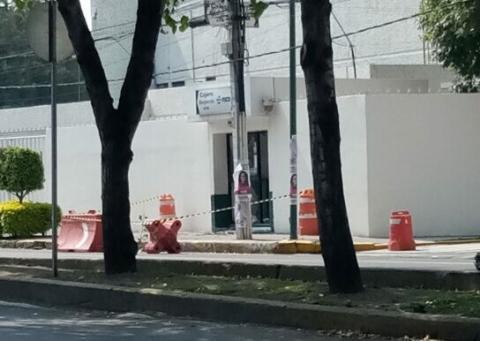 Just a few minutes after 00:00 hours of May 23rd 2021, we placed an explosive artifact, made based in gunpowder and butane gas, with the objective of destroying the facilities of BANJÈRCITO located in CALZADA DEL HUESO 7700 COL GRANJAS COAPA DELGACIÒN TLAPAN, DE LA CIUDAD DE MÈXICO, objective that we accomplished perfectly.

We did it because…

I
.We remember Mauricio Morales, chilean anarchist comrade which died tragically one May 22 of the year 2009, while transporting an explosive artifact that apparently was en route to the Gendarme School of Barrio Matta, Santiago. You’re still present, comrade!

.We heed the call for actions made by the anarchist prisoners of the world. From Mexico, to Greece, from Montevideo, to Belgium!! From Argentina to United Kingdom, may we continue to encounter armed pleasure!!!

.We condemn the repressive operations against anarchists in United Kingdom and the global network of counter-information. We’re fully in solidarity with those who face repression in United Kingdom, as well as the comrades from 325, Anarchist Black Cross Berlin, Northshore Counter-Info, Montreal Counter-Info and Act for Freedom Now.

We repudiate Mexican militarism. Today in Mèxico we live under a reinforced military regime. The government of Andrès Manuel Lòpez Obrador has deepened the expansion of the military corps’ political influence, presence and access to resources; increasing their power, doubling their budget and extending their area of influence: handing over to the military areas like migration, ports and customs, distribution of social programs, and public segurity. This, of course, has provoked a painful deepening of social verticalization, making social hierarchies ever more rigid. And what’s the result? More violence against the exploited classes, forced disappearances, extrajudicial executions, sexual torture, an increase in feminicides; all of it punishing the well-being, like always, with more emphasis on those who create life: women. Or, how else, if not by throwing us into the realm of the disposable and appropriating our bodies, can they sustain these social hierarchies? And then, when the mothers, looking for their disappeared children cry screams of horror, what does the Mexican state have to offer?! Mockery and disdain is the only thing they’ve received from Lòpez Obrador! But, what is the cause of so much indolence? We think that if this system remains indolent before our cries it’s because our pain is precisely the condition that makes possible the continuation of this order of exploitation! The structure of this monster feeds on our blood and our wombs! Without the value that we create, without the life that we give, without the bodies that we care for, how could the life that this order then sucks out be reproduced? That’s why neither the state, nor patriarchy, nor el capitalism will stop this massacre themselves! We’ll have to stop it ourselves!

We weren’t born women, they made us women. So now we reclaim it! And from that point of view, we tell them clearly: WE WILL NOT ALLOW THEIR EXPANSION, NEVER AGAIN DOCILE IN THE FACE OF THEIR ORDER OF DEATH AND MISERY!

.The night of Monday May 3 an elevated portion of the Mexico City Metro collapsed, the number of deaths rose to 26 and there are at least 10 hospitalized in grave condition. To all those who are guilty, FUNCTIONARIES, CAPITALISTS, MURDEROUS COPS, we tell them: Be very afraid, because we’re coming after you, and we may be closer to you than you may think.

.In the morning of May 18, a group of 95 students (74 women) were kidnapped by the mexican state, in a cowardly act of criminalization of social protest. We demand their immediate release. Down with the prison walls! All prisoners are political!

.Soon there will be elections in Mèxico. We repudiate the state! We won’t let it sleep! W will light up the revolt!

p.s. The bourgeois mass media in Mexico kept silent about this action. That only confirms their consensus of the classes to keep their power. And it reiterates our conviction for overflowing arguments and actions. If we make them uncomfortable, they want to silence us, which means we’re on a good path. They will not silence us!

Why We Break All The Windows