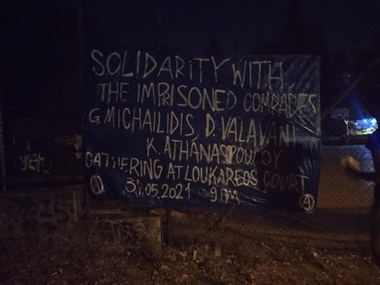 The trial of the anarchist prisoners Konstantina Athanasopoulou, Giannis Michailidis, Dimitra Valavani begins on May 31. The comrades had been arrested after an operation of the anti-terrorist unit in the area of ​​Agia Paraskevi in ​​a stolen vehicle in which a weapon was found. Giannis took full responsibility for this. From the first moment of their arrest, a campaign was launched to discredit and criminalize by the media. Meanwhile numerous accusations were added to their trial in order to frame the comrade as a “criminal organization” with the implication of a more severe sentence. In the trial that starts on May 31, the essence is that the state will try to condemn the struggle choices of our comrades in order to show through their exemplary punishment the futility of the struggle. Risky and costly choices, such as escape from prison, the choice of means, practical solidarity with the persecuted were, are and will remain an integral part of the history of the anarchist struggle. We today experience history lived by those who took up arms against capitalist domination, those who gave life to anarchist ideas, those who acknowledge that the struggle for individual and collective liberation develops through the war against the state and capital.

We call for international expressions of solidarity such as the bannerdrop we did and the slogans that we wrote, so that through our mass presence we can send a message of solidarity to our imprisoned comrades. To stand by them in their effort to fight against any accusations. To raise our fists until the day they walk next to us. Until release…

Solidarity is our weapon

Until all cages are empty

Genuine Service to the People Needs No Emergency Powers

Land of love and freedom